The idea to do a long term review of the Sport Glide started early in the year when I first laid eyes on it during the Ride, Ride, Slide event hosted by The Motor Company in Croatia. 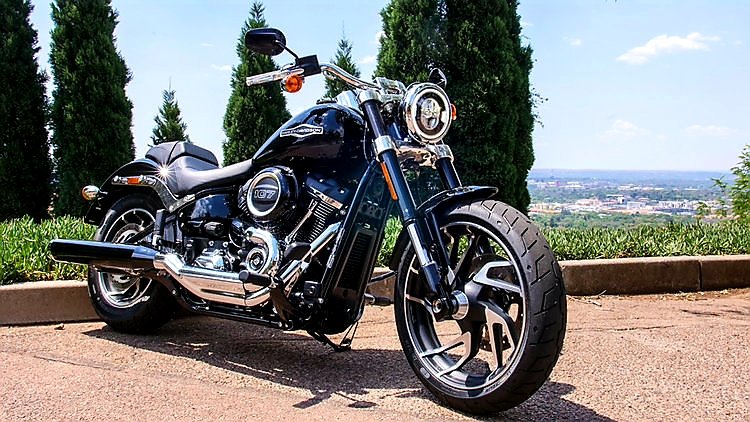 We where there to ride the Street and Tour Glides, as well as new Sportster models. Doing duty as a backup bike for the support crew was a maroon Sport Glide. From the moment I saw it I felt that it was the most perfectly proportioned Harley I had ever seen! The more I studied it, the more the practical aspects of the bike emerged. Harleys, in the past, have tended to be long on form and short on function. People buy them because of how they look and feel, and perhaps how they make their riders feel, too. In fact, this is such strong motivation amongst the old Harley faithful that it is, for them, almost blasphemous for H–D to tamper with the mould. 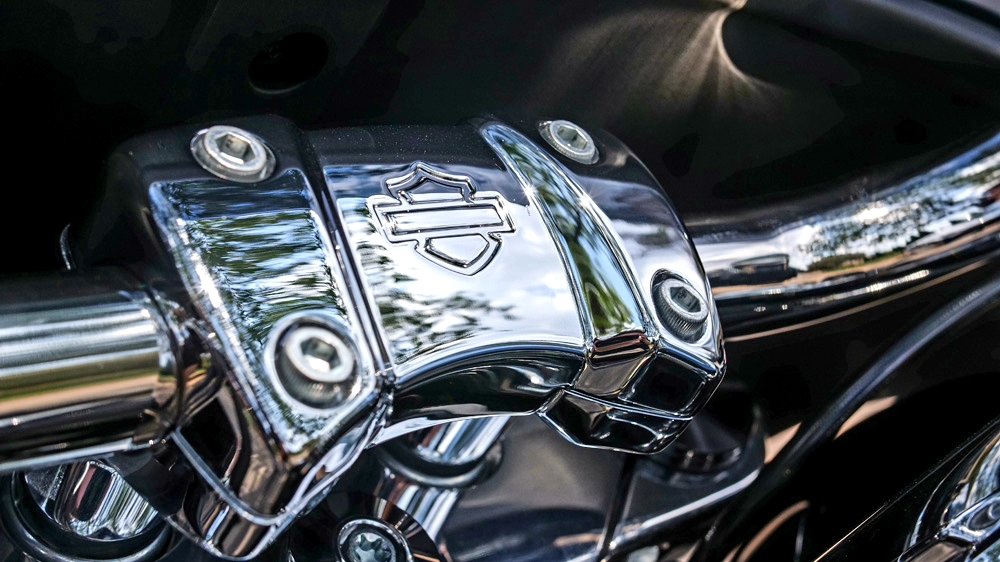 I overheard a well known, long term Harley rider, talking to a group of buddies at a Harley gathering recently. Whilst he conceded that the new Milwaukee-Eight motors where great, “they no longer feel, or sound”, like old school Harleys. Wow! How dyed in the wool can you get? From my perspective as a lover of two wheeled vehicles generally, and having owned at one point a H–D Sportster 1200 Custom, the improved function part of the form versus function equation makes total and complete sense. The latest Harleys are simply vastly better motorcycles. Period! What it does illustrate however, is what a blessing, [and curse] a strong brand identity can be. Sometimes you are damned if you do, and damned if you don’t. 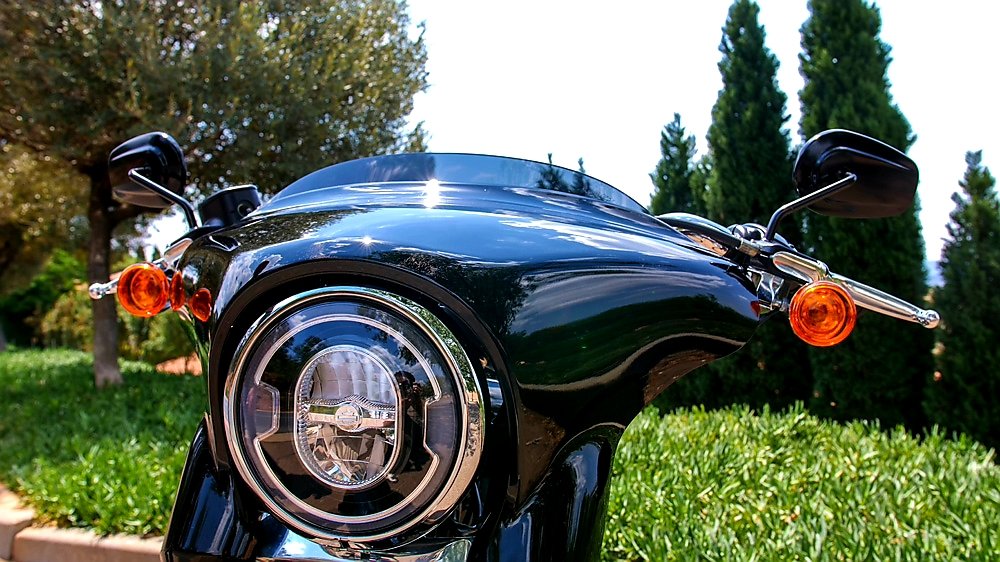 Lets take a proper look at the Sport Glide then, shall we? The bike has the typical, low slung Harley look. The front end sports the most beautifully sculpted handlebar fairing. Small and neat, it is big enough to be functional, as, like on most Harleys, you sit low in the bike. The bars are not overly wide and fall naturally to hand. The tank is the absolutely classic H–D profile and takes a decent 18,9 litres of gas. A slim sculpted double seat riding onto a bobbed rear fender completes the perfect profile. Two “bagger” styled panniers enclose the back wheel. Like baby bears porridge, they are neither too big, nor too small, but “just right”. The rear indicators double as stoplights, and, like the headlight are LED’s. Try as I might I cannot fault the classic looks of this bike. There is nothing I would want to change. 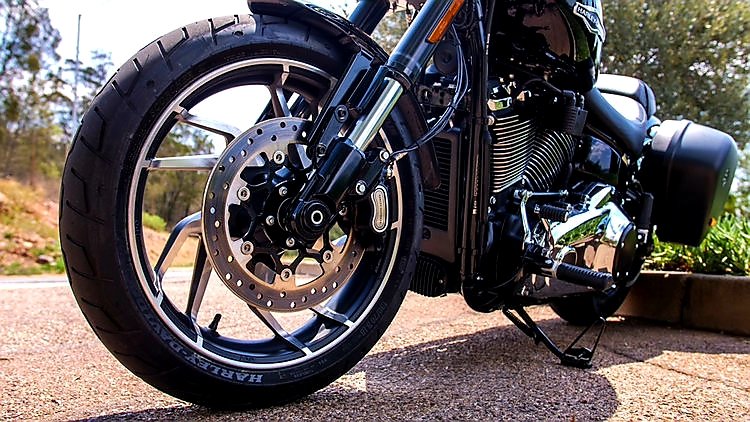 The wheels are what Harley call their “Mantis” design, and with a 130/70×18 up front, and a 180/70×16 rear are another stunning contributor to the overall looks of the bike. Thankfully the wheels are also sized to complement the handling characteristics of the bike. OK, so I know i’m gushing, but see for yourself, will you?. 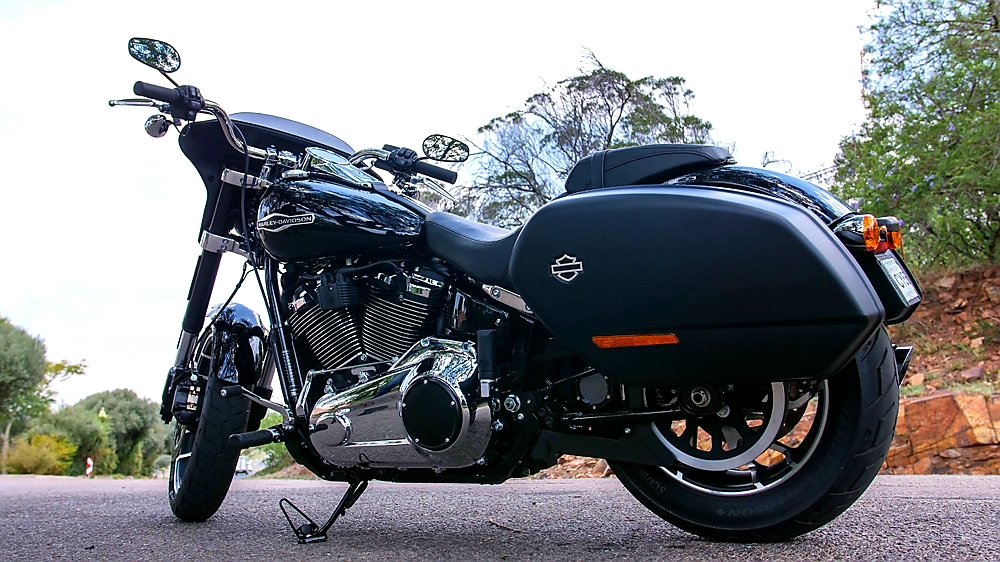 Central to the looks is the black and silver accented 107cu i Milwaukee – Eight V-Twin engine. That is 1745cc in metric speak. Whilst the 80 odd horses it pumps out [the Motor Company doesn’t quote HP figures, but Cycle World ran it on a dyno] may not sound too impressive, however Harleys have always been about torque and real world power. Fully fuelled, the bike is for a H-D, quite trim at 317 kg’s. The 145 Nm of torque @ 3250 rpm, punts the bike along very nicely. The 6 speed gearbox has that authentic, hewn from steel, American feel. Shifts are precise but solid. Final drive is by the now a familiar industrial strength belt. The bike is braked by a single disc, chomped by a 4-piston calliper up front, and a 2-piston calliper at the rear. Brake action, whilst not in the Superbike league, is adequate and reassuring. ABS is, as is the modern norm, standard. 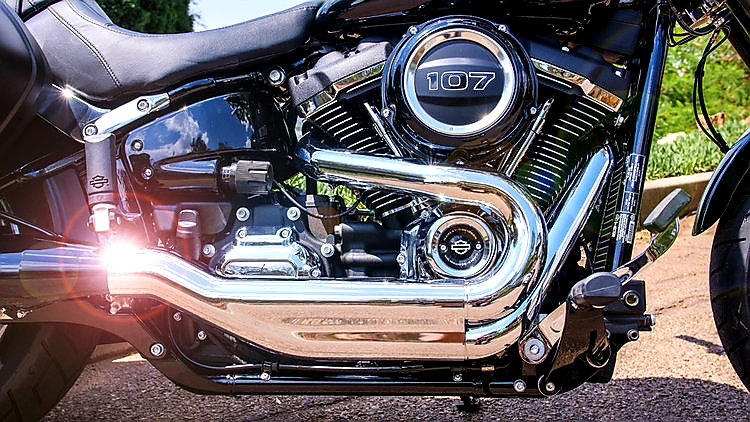 Instrumentation is via a tank mounted circular speedo with a digital window showing trip distance, RPM, fuel range, fuel level etc, everything is accessed via a simple button on the left handle bar switchgear. Also nestled on the same side is a cruise control button. Magic! Starting is by way of the now familiar H-D key fob keyless system. Put the “kill” switch in the “on” position, and the beast comes to life. Hit the starter button, and you are in business. Everything about the bike reeks simplicity, like God intended! 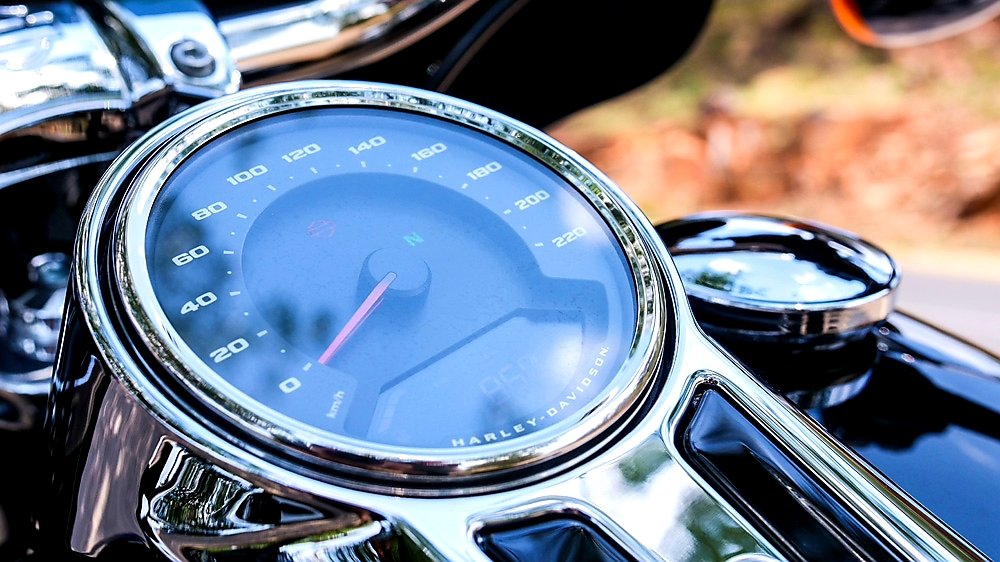 It was this inherent simplicity, allied to the stunning looks and all round practicality of the Sport Glide package that got me thinking. The fact is that we are living in an increasingly sterile world. Almost everything that used to be fun, is either now no longer politically correct, infringing on someone’s questionable human right, or just generally frowned upon. Enter motorcycles. They are the one thing that still shatters the boring mould! Unfortunately, suggesting that someone “get a bike, Bru”, is not always met with enthusiasm by all and sundry. Motorcyclists do not always ride with the necessary sense of self preservation that they should and have caused bikes to be summarily labelled as dangerous. Enter the Motor Company’s products. Harleys have never placed the emphasis on speed, but rather a lifestyle. Harley riders often ride in groups, or even when alone, tend to announce their presence with pipes emitting some rolling thunder. 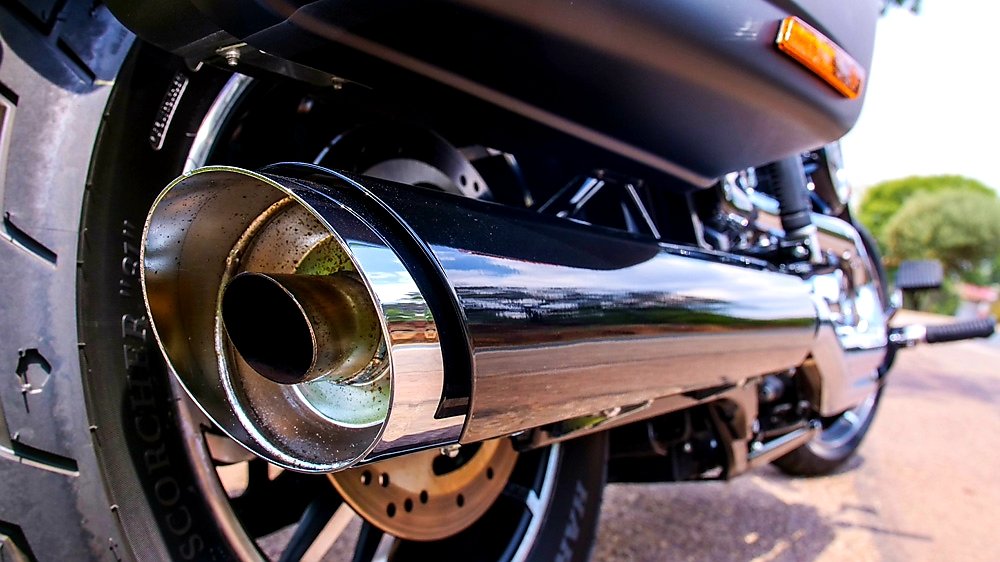 The biggest killer of motorcyclists, their ego’s, are, in the case of Harleys about form, not function. You don’t have to race your buddy to score points, you just have to make your ride look sweeter than his. The two of you then roll down the road, slow enough for all to see your awesome American Iron. Statistically this is proven by the low rates for insurance of Harleys as opposed to other, similar value bikes. Fact is, Harley riders crash less. So here’s the thing. 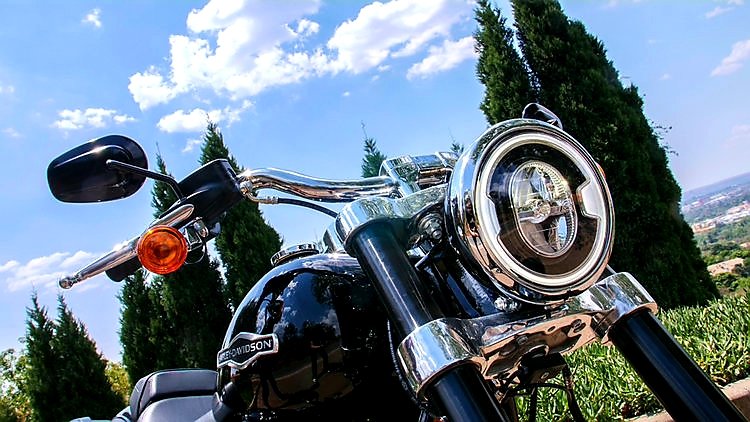 Joe and Janet Bloggs live this dreary existence. Work, work and no play. “We have to get a life”, they say. But how? Buy a Harley, that’s how! Flog one of your four wheeled shopping baskets, and for similar money, or even less, buy a Sport Glide. Bowl the cage with the excitement factor of a dysentery amoeba and experience what I have over the last few weeks. After studying the practical side of the Sport Glide I decided to use it day to day as transport, and as the freedom machine that it is, on the weekends. Rolling up the garage door and surveying the sexy curves of my ride for the day always evoked a sense of occasion. I have just never had a Fiesta, Polo, i 20 or the like ever do that to me. Roll out of my estate, greet the guards who are giving me a thumbs up [which I never get in a car] and cruising to the Gym is a whole new buzz. Firstly, the traffic is now a non entity, with many cars actually moving over to give me space so that they can better eyeball my gleaming black Glide. Pull up at Virgin Active and all and sundry stop and drool over my ride. Flip! Can it really get this good? 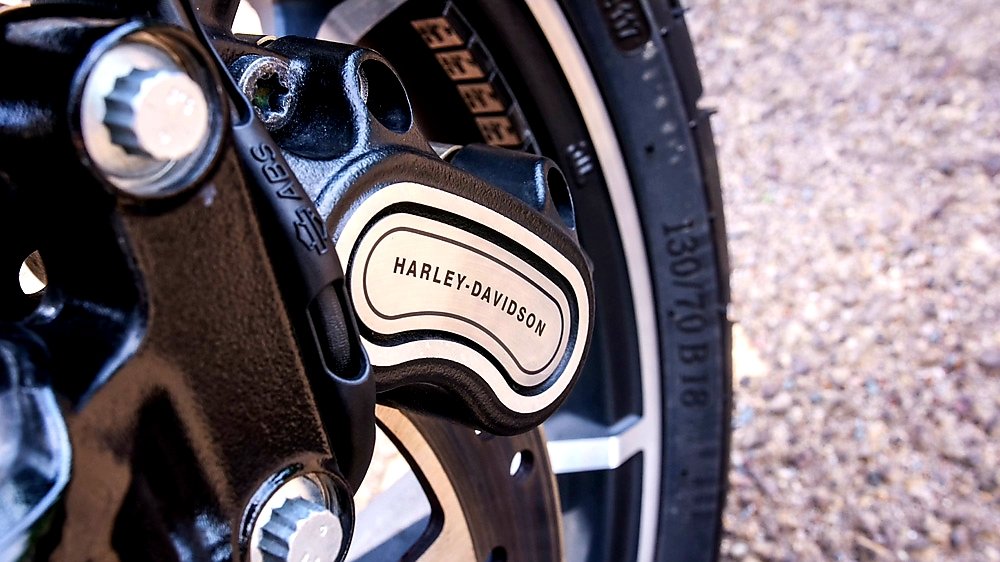 The whole day I cruise between clients, slowly growing accustomed to their envious stares and questions. The bike performs this hum drum stuff faultlessly. Instead of being frustrated by heavy traffic, I simply roll slowly by, revelling in the freedom. The panniers swallow up my kit and sundry goods. The commanding riding position makes you feel like you own that particular piece of road. The Glide torques off the line at robots leaving all in it’s wake. At one point a fellow on a GSX600 pulls up next to me, with let’s race body language. I look straight ahead and proceed on my way, treating him with the disdain he deserves. For heaven sake, would you try and give the King a wedgie?. The Sport Glide, despite its decent turn of speed, is above that sort of foolish frivolity. 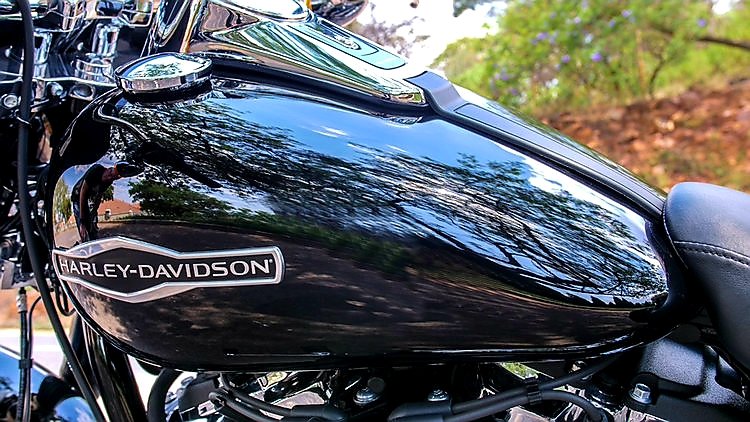 Come the weekend and my panniers are packed and I am off to Mpumalanga to put the “Sport” part of this Glides name to the test. I choose my route carefully. The highway is despatched in comfort, with the cruise control set to 130. The tiny fairing works a treat at this speed, leaving my helmet in clean air but taking all the windblast from my body. Topping up with fuel brings another revelation. 23 Kpl! Take that, Fiesta and Polo! This gives me a touring range of over 400 kays. I decide to avoid the stop and go’s in Schoemans Kloof and go straight past Waterval Boven, revelling in the stability of the Sport Glide through the long sweeps. This Glide is a Softail, so I dialled in a lot more preload by simply turning in the easy to hand adjuster. 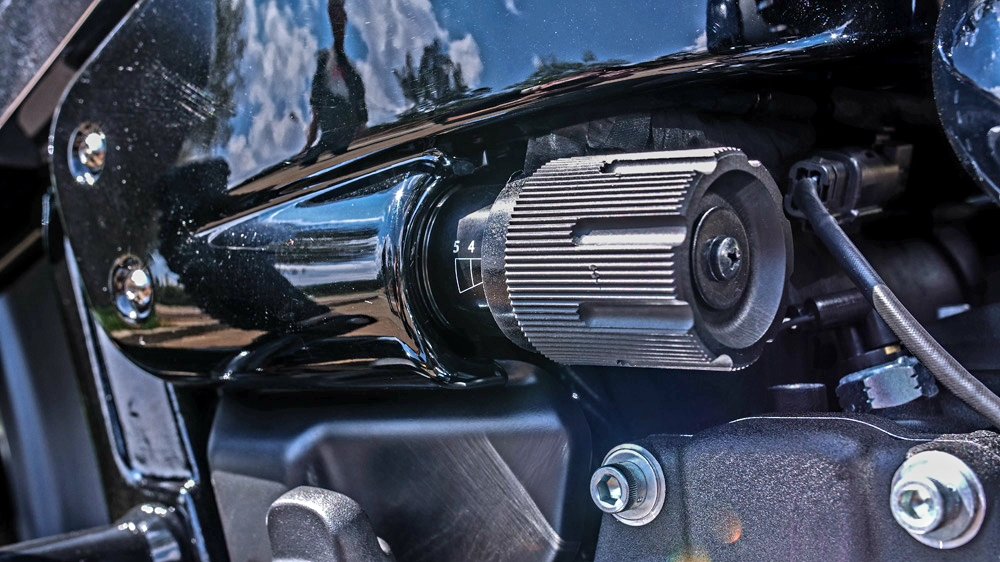 This gained some ground clearance and firmed up the ride. At no stage was it harsh, but rather soaked up everything the sometimes less than perfect roads threw at it. It also eliminated the vagueness felt when on a softer setting, completely. Front suspension is upside down cartridge forks, which, whilst non adjustable, work just fine. 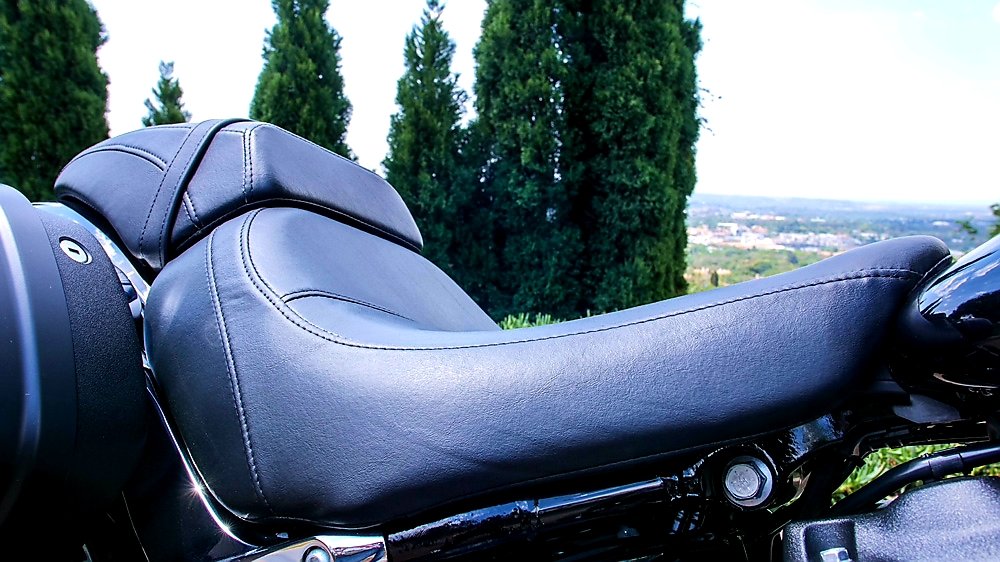 Turning past Sudwala, then on to Sabie and to my Graskop stop for the night, I rode at a sports touring pace, enjoying the ride more than on any Harley I have ever ridden. At first I was apprehensive about grounding hardware through the bends, but then started to relax and simply enjoyed the ride. Whilst by no means a “scratcher”, this Harley–Davidson deserves its “Sport” label, certainly in the context of what genre of bike it represents. I did not even touch a foot peg once over the full duration of my ride. My travelling companion, Ryan, was on his Yamaha XSR 900, their heritage bike, and a splendid one at that. At no time did I feel that I was holding him up. On the contrary, he was impressed by the manner in which the Sport Glide powered out of the sweeps, and up the straights. Obviously, if it had come down to a race, the Yamaha would have been off like a sweaty sock, but the point is I had a great ride, at a fair clip, on the Harley. This is no one trick pony. 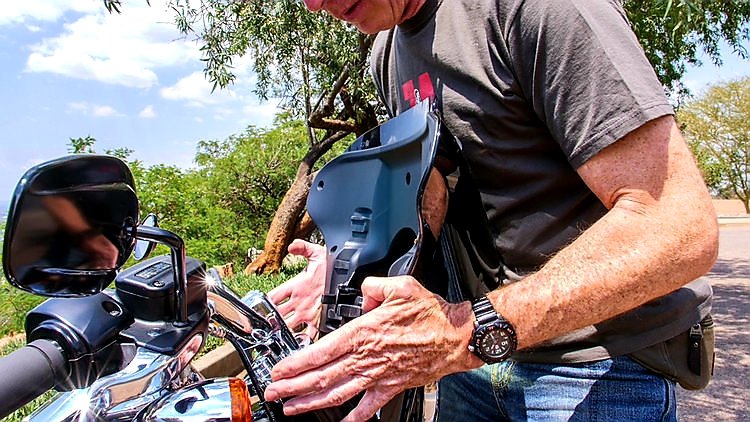 Let us talk versatility. The Sport Glide has some ingenious design features. The handlebar fairing, or cowl, clips off, literally, in 8 seconds. Similarly, the panniers detach in seconds. You are then looking at a clean mean street prowler. It looks as stunning naked as it does dressed. Going on a Cafe Cruise? Rip her clothes off! Taking a tour ? Pop on the panniers and cowling. All this without needing a single tool. Brilliant! 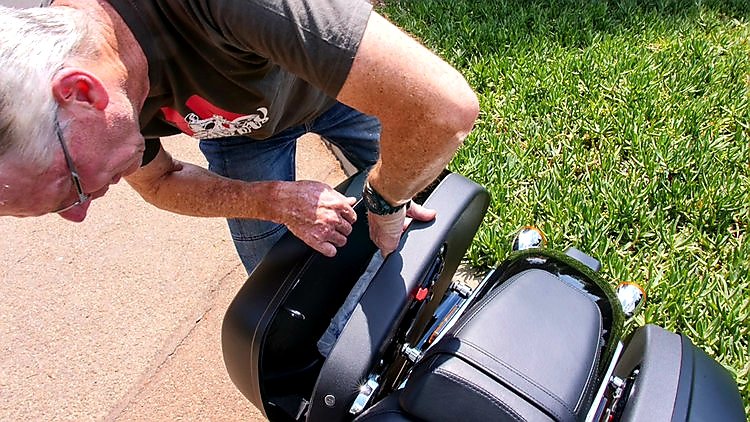 So let me try and summarise. In the Harley–Davidson Sport Glide you have an immensely versatile package that can literally change the way you are living your life. Harleys have been around since before nostalgia became vogue. Now that they have added a huge dollop of function to their world renowned form, a lifestyle change is more feasible than ever before. Dump the Polo, keep the family car, and get yourself a Sport Glide. Your commute will become a pleasure and your babe will love the new man in her life! 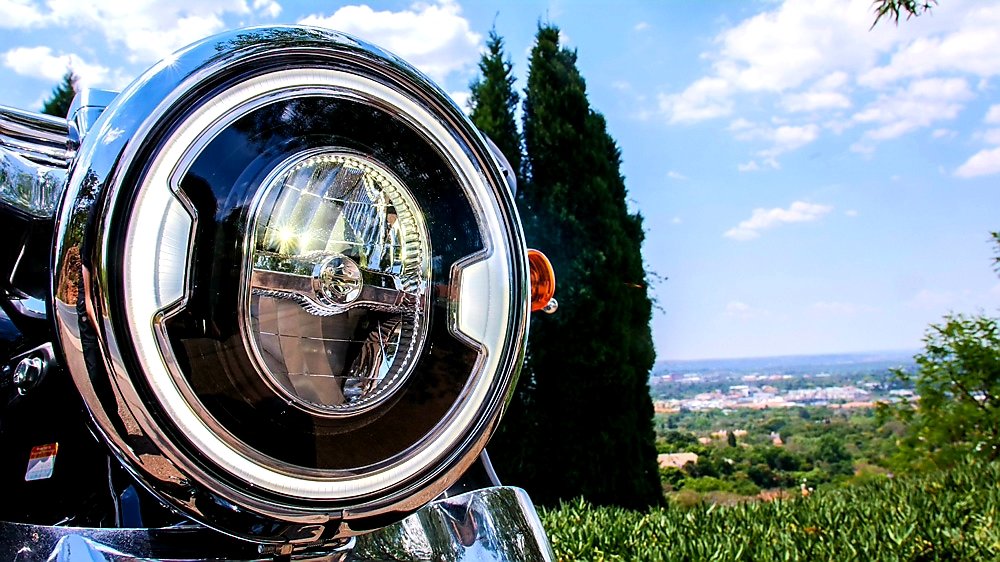 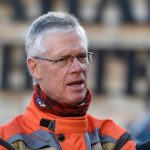 My name is Dave Cilliers. I consider cars as four wheeled shopping baskets and only worth using as a last resort! For years bikes have been my primary transport. Racing, touring, commuting or just kicking up dust on African tracks, I have owned over 270 motorcycles and ridden millions of kilometres. I am happiest when sharing my passion for motorcycles with like minded people whilst traversing Africa in search of adventure.