It’s hard to write something about oneself without being subjective and, since I want to tell you true stories, I will list some of my motorcycle-related accomplishments without making any comments. But you must be patient, almost 50 years have passed since…

1975 – I built my first full-face helmet and the first motorcycle fairings out of fiberglass.

1977 – after winning a series of selection competitions, I was accepted in the IIRUC motor team, the greatest racing club at the time, coach George Zdrinca. 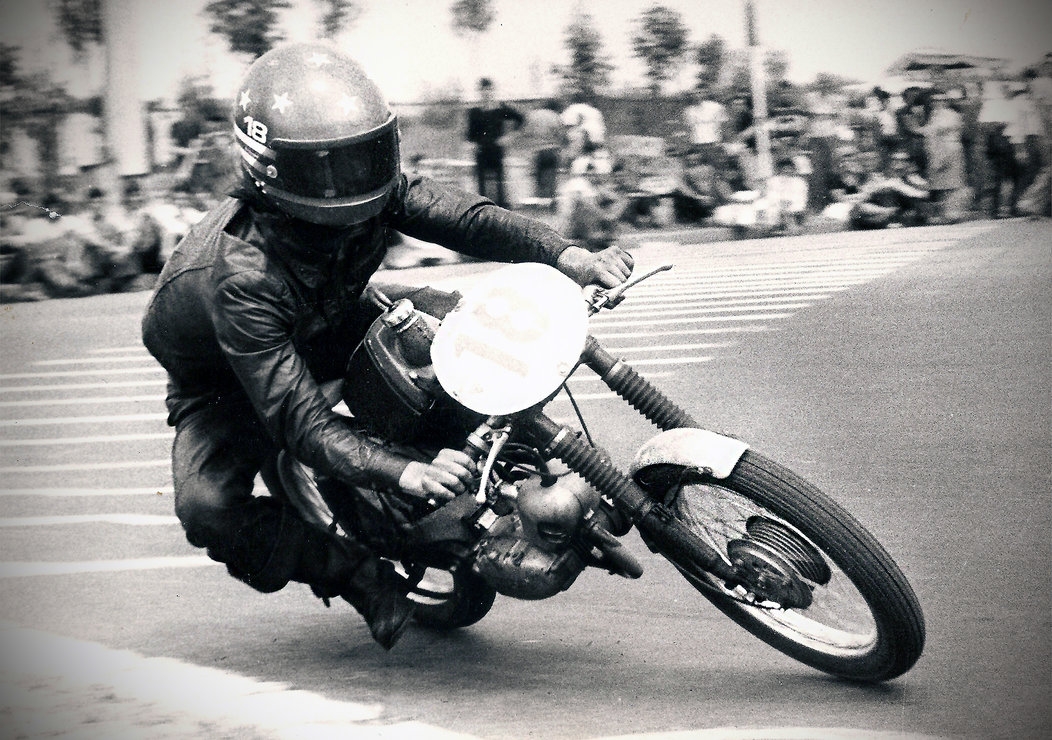 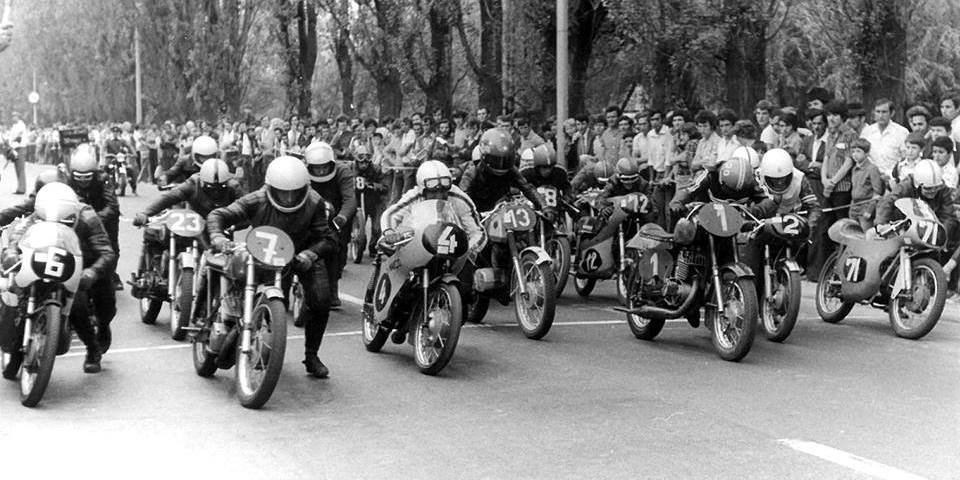 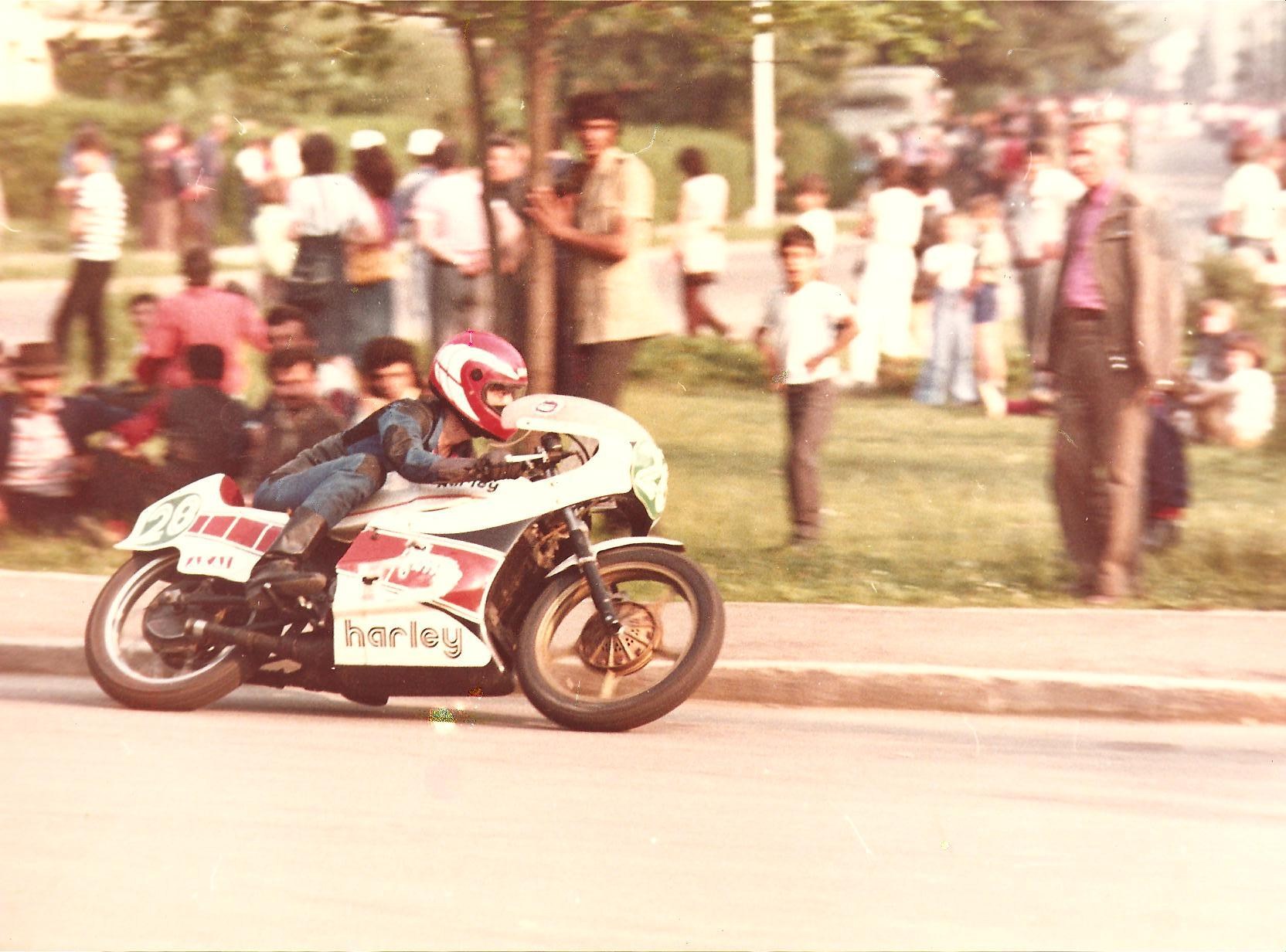 1984 – the first international racing season for the Romanian National team in the Friendship Cup, the communist countries competition, gathering teams of the 4 best riders from 8 countries. 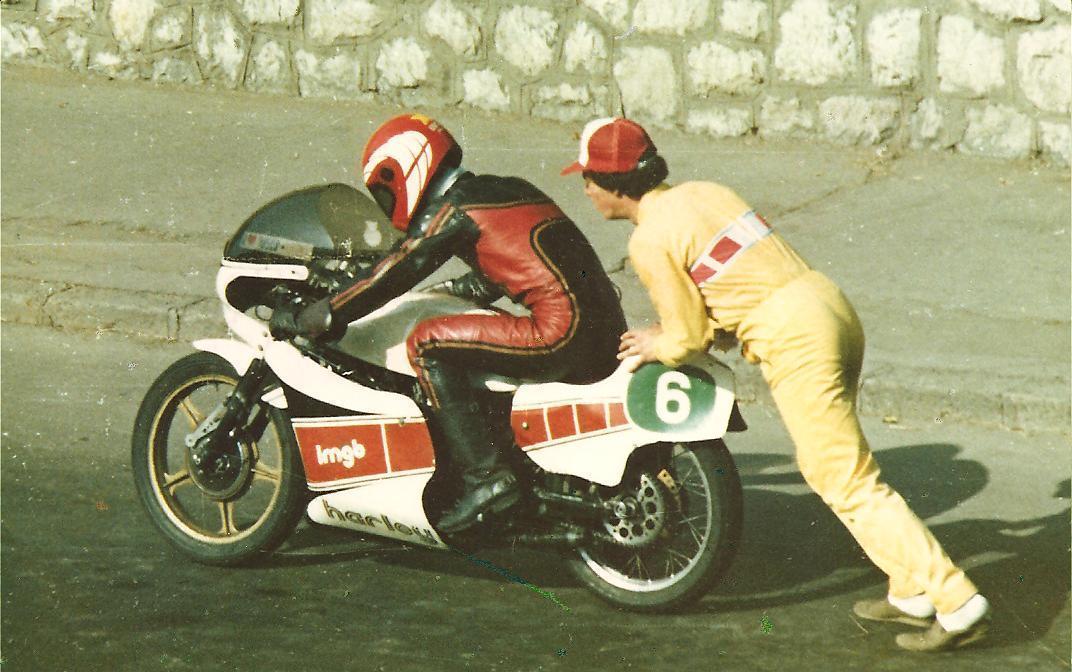 1986 – 18 races (out of which 6 International)
– winning the Romanian Motorcycle Federation Cup with the IMGB team
At the beginning of the season I bought the bike of the East German Champion (full chassis, without engine, produced by the German manufacturer Heinz Junghans Sr.)

– elected as the only representative of the riders in the Board of the Romanian Motorcycle Federation, position which I held until 1990 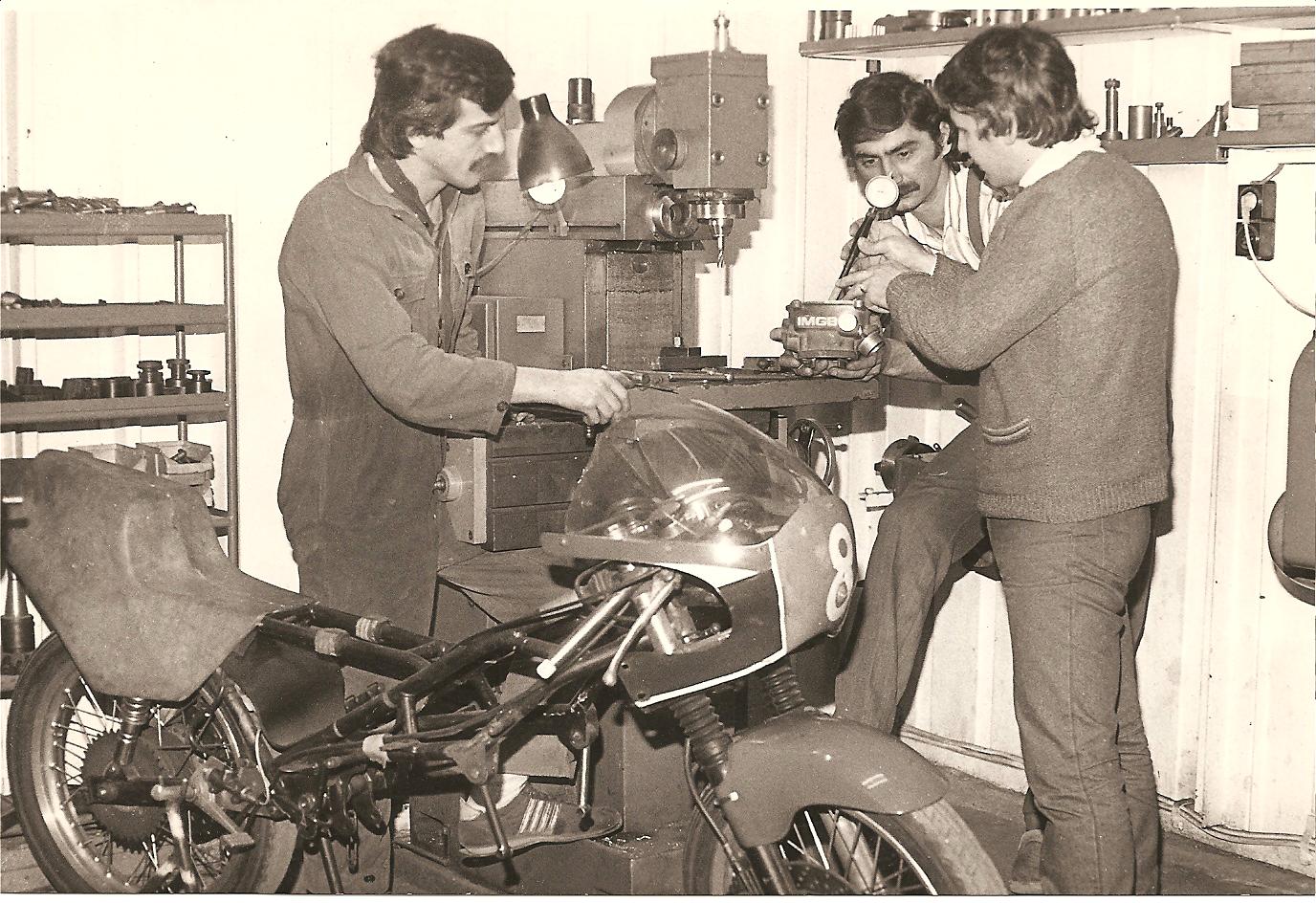 – Sportsman of the Year elected by the Romanian Motorcycle Federation

– finally I am awarder with the honorary title Master of Sport 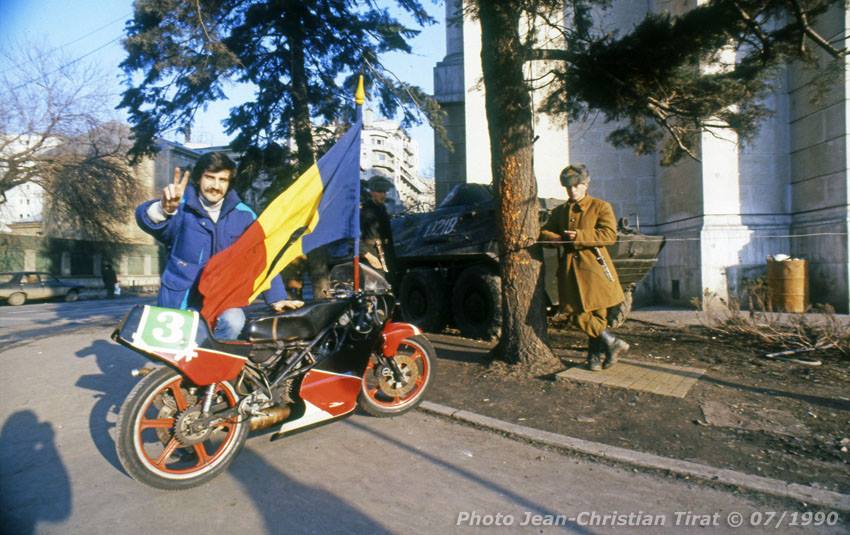 1991 – together with Vlad Haralambie, the 50cc National Champion, I established the first private motorcycle racing club in Romania – Moto Club Number One, which became the Yamaha Racing Team Romania in 1996.

– I stopped the production of fiberglass items that I developed in 1976, having produced in the meantime over 1,000 helmets and 1,000 fairings.

1992 – I opened the first Moto Market shop, specialized in motorcycles and accessories in Bucharest, located at the intersection of Traian St. and Pache Protopopescu Ave.
– we brought in the shop the first new Yamaha motorcycles, imported from the Yamaha official network
– we sold the first imported Daelim motorcycles (equipped with Honda engines)
– during the first year of activity we sold 300 helmets produced in Korea

1993 – after a break of 2 years I returned to the starting grid, with Team Manager Dragoș Panaitescu, Master of Sports, 500cc double Romanian Champion.

– 9 races (out of which 3 International)

The year was marked by a great achievement: after long negotiations conducted in Romania and Greece, we convinced Yamaha to open its official business in Romania, Yahama requesting that me to close my own shop and run the Yamaha business.

1997 – 5th place – 250cc – Romanian National Championship, with 2 wins and a 2nd place, with a serious injury during the qualifications for the first race, followed by 3 DNS, on a Yamaha TZ250 ’91 model
– 2nd place in the Romanian Motorcycle Federation Cup with the Yamaha Racing Team Romania, as well as a 4th place at 125cc (Honda RS125 Palmer) and a 2nd place at 250cc 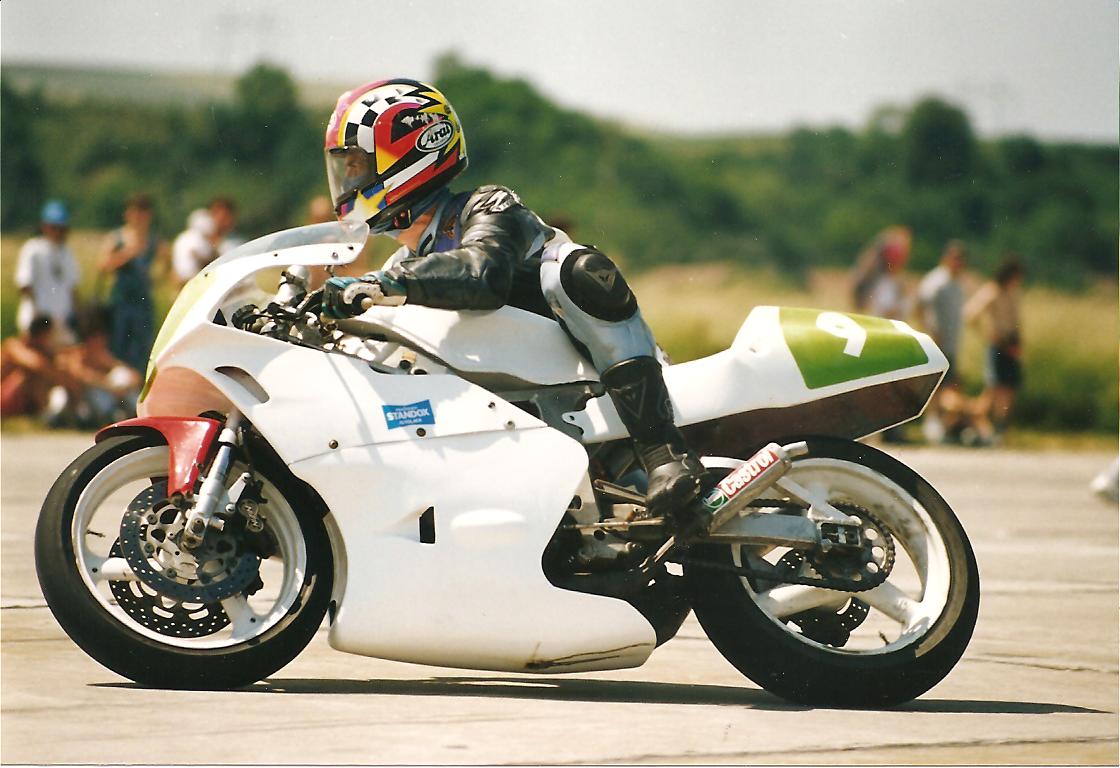 1998 – the last racing year for the seniors of the team (Vlad, Tase and me).
– we founded the Yamaha children’s team, with which we won 3 consecutive junior National Championships.
– 2nd place– 250cc – Romanian National Championship, with 2 wins, a 2nd place and 2 times in the 3rd place
– winning the Romanian Motorcycle Federation Cup with the Yamaha Racing Team Romania – Astra. 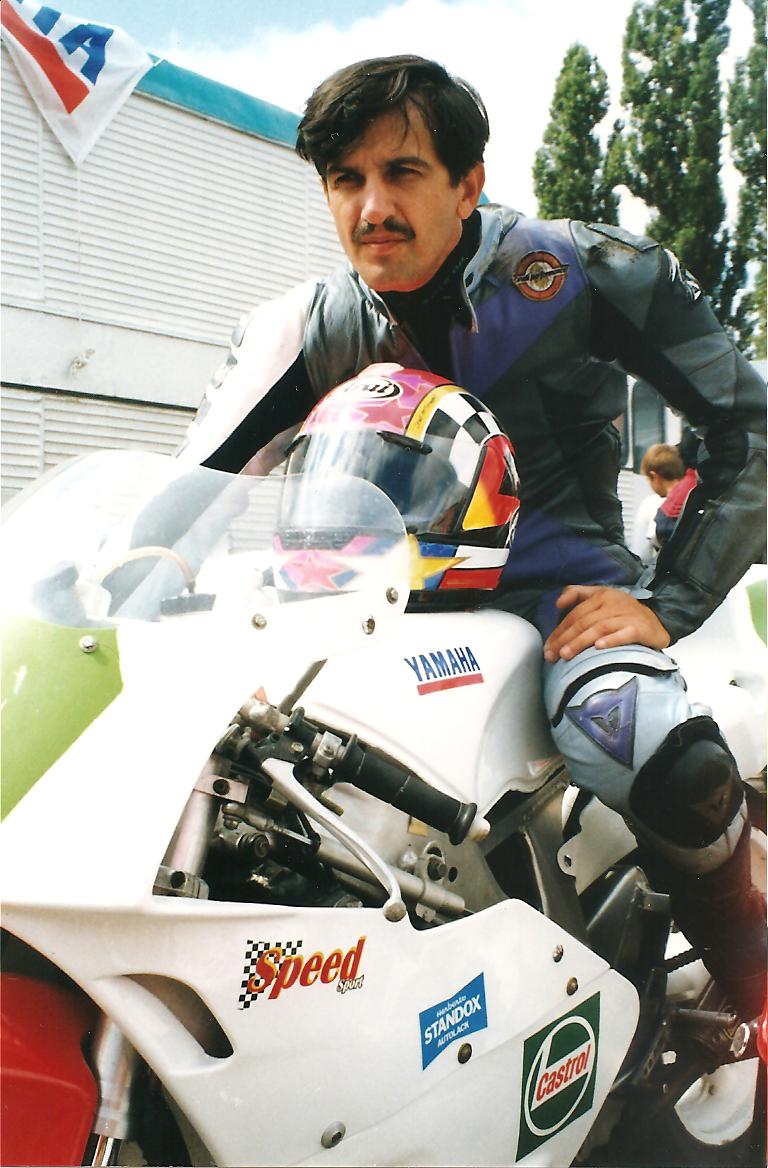 2002 – I opened Moto Market, a shop specialized in accessories, located in the Piața Romană subway station

2004 – after 10 years spent with Yamaha Romania, I joined the ATS company in order to sign a dealer contract with Harley-Davidson

– I obtained the instructor license for A and B categories

– Moto TT School started its activity, this being the first professional motor school, equipped with new Yamaha motorcycles, full protection gear and entirely new teaching methods. From the first months, the school was recognized as being the best in the field, at a time when all the other schools had Minsk and CZ bikes.

The school office was located on Iuliu Maniu Boulevard and Moto TT School became the most powerful Yamaha dealer in Romania, until 2008, when the school ceased its activity.

2005–2006 – Moto TT School trained hundreds of students and sold 88 new bikes, which accounted for 5% of the total bike sales in Romania

2006 – I obtained an exclusive distribution contract for the Hyosung products, the best bikes in Korea, after almost a year of assiduous requests sent to the company and I opened the Hyosung shop on Nicolae Titulescu Boulevard

2007 – I became a commentator for Eurosport Romania, first for WSBK, then for MotoGP, BSB and even motocross and speedway

– after 3 years of negotiations, Harley-Davidson Europe decided to launch its activity in Romania, with a single authorized dealer and we were invited to Oxford to sign the contract

– I attended a course in Amsterdam at the Harley-Davidson University, a business simulation (Red Line Simulation H-D) and I won this course with my team.

– I attended classed in the Harley-Davidson University in Budapest

– the H-D operation in Bucharest, which I led, got its best result since its establishment and up to present: 62 motorcycles sold during its first year of activity

2009 – I attended classed in the Harley-Davidson University in Washington DC, where I met Erik Buell, the creator of the Buell bikes

– I left the ATS company, the Harley-Davidson dealer

– in the middle of the economic crisis, I chose from 3 job offerings to become the Manager of the Motorcycle Department of the Dageco-Carpați group of companies, the MV Agusta and Cagiva exclusive Distributor, thus turning down the offer to become Editor-in-Chief of the Univers Moto magazine (the Romanian Motorrad)

2010 – I took part in the introduction to the new MV Agusta F4 model, where I was invited by President Claudio Castiglioni, and there I met one of my idols, Giacomo Agostini, 15 times World Champion and his former colleague in the MV Agusta and Yamaha teams, Phil Read, 7 times World Champion.

2011 – the Carpați company signed a dealer contract with Honda, and for a year it was the only authorized Honda dealer in Romania. Thus, I had to lead 3 separate showrooms: MV Agusta & Cagiva, Honda, Lifan and 2 service stations.

2012 – I received a visit from the President of the Honda Trading Japan, Shigeru Takagi.

– I attended the presentation of the new MV Agusta F3 model, in the presence of the company’s new President, Giovanni Castiglioni and its new CEO, Massino Bordi, no other than Mr. Desmodromic.

– I attended a several days’ training for the shock absorbers’ settings in the Öhlins’ Training Center, near the Nürburgring circuit.

2013 – I left Dageco-Carpați to deal more with my own business, Moto Market, according to the clients’ requests, which meant a higher emphasis on online shopping.

And, since 40 years have passed since bikes and everything related to them became my main passion, there had to appear a motorcycling blog, where all these years’ stories would find their place.