Nothing excited me more as a sixteen year old, than getting up at dawn on a beautiful Sunday summers morning. Throw on jeans, T-shirt and jacket. Grab my open face helmet and gloves and push my Honda SS50 GT into the street.

The lure of the open road egged me on as I allowed the little Honda to warm in the fresh morning air. Riding out of town on the old Bronkhorstpruit road, I would daydream about the motorcycle adventures awaiting me. Long distance travel by motorcycle has always attracted me with an inexorable pull greater than gravity itself. 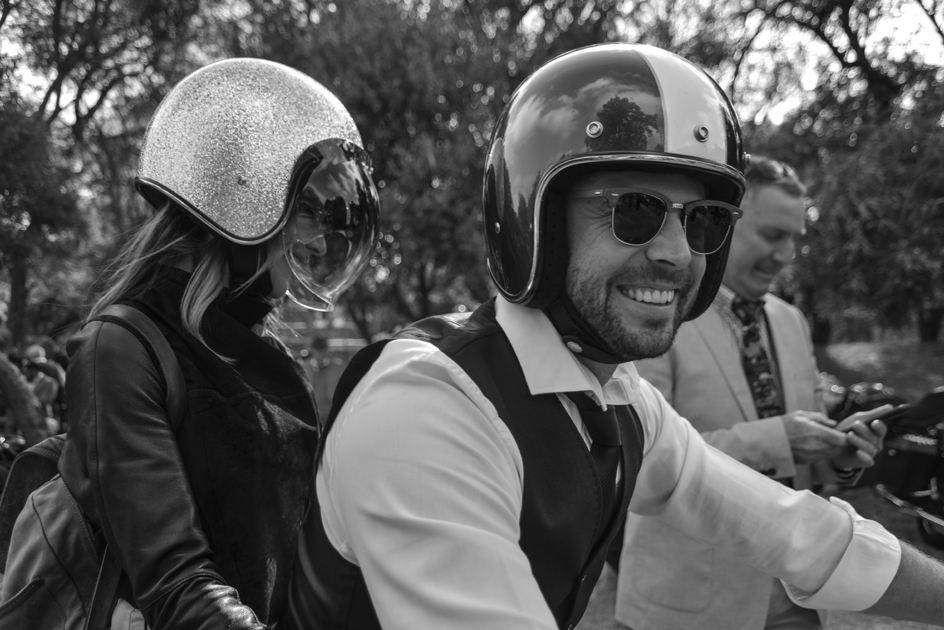 It seems I am not alone in this. As far back as 1912 it is documented that a fellow by the name of Carl Steams Clancy circumnavigated the globe on a Henderson motorcycle – 20,000 miles in almost a year. How’s that for hardcore? Probably 90% were dirt roads on a rigid frame motorcycle. 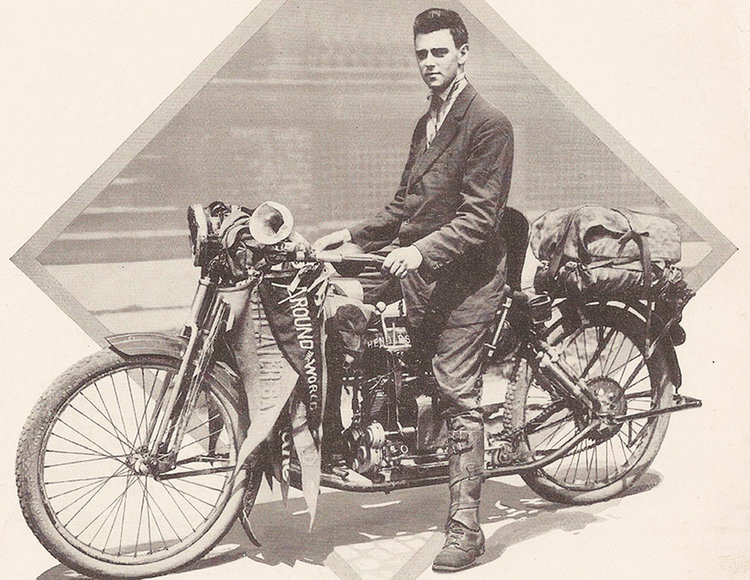 These days we argue for hours on end about the merits of our “Adventure Bikes”. In 1912 the trip was the adventure and the bike simply the means. In fact, on that note, here is a thumb in the eye for you “Adventure bikers” out there! 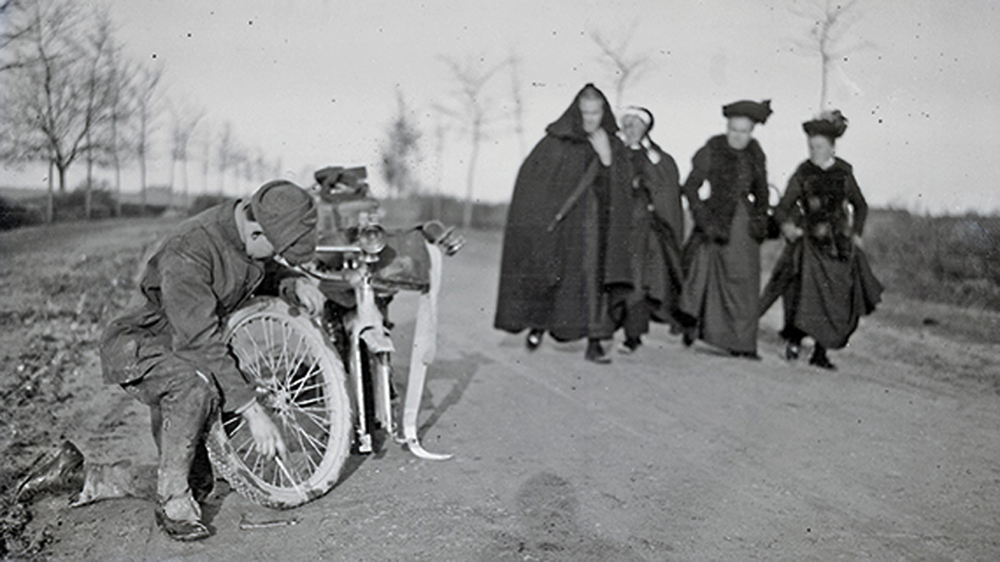 The Guinness record for the most mileage by a round the world traveller is held by an Argentinian, Emilio Scotto, who over the course of ten years covered 500,000 miles (735,000 k’s). He rode through the Amazon, crossed both Americas (North twice), Europe (including Iceland), Russia, Mongolia, Asia, India, Thailand, Australia, New Zealand and Africa. This included crossing the Sahara and traversing the West and East coasts. Congo, Zaire, Cameroon, Equatorial Guinea, in the rainy season! Ok guys and girls, what bike do you think Emilio rode? What appropriate bikes were around in 1996 when he set out from Argentina with 300 US dollars? Africa Twin? BMW GS? Yamaha XT 600 Tenere? Ok, I’ll tell you, because if you don’t know you will never guess! It was a Honda Gold Wing 1100 Interstate. 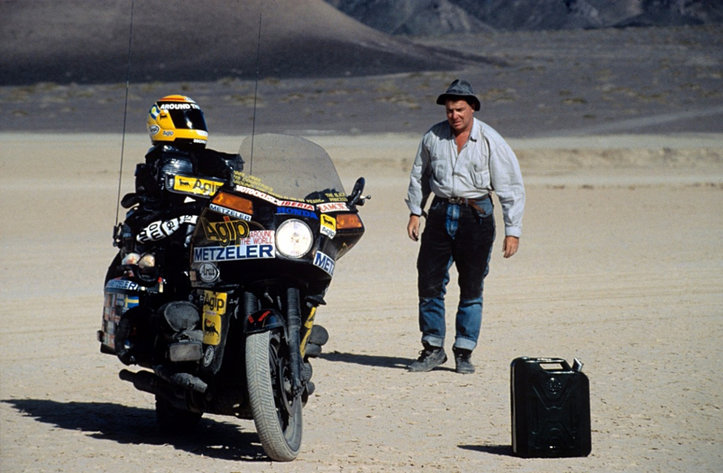 In Emilio’s words, “She is my friend, my only travelling partner”. Laden with all his worldly possessions, literally! 4 gallons of fuel strapped on top of each pannier, and 5 gallon of water on the passenger seat, Emilio rode this 1100 pound behemoth everywhere over the course of 10 years. Deserts, swamps, ice and snow, he crossed them all. Kinda screws your bragging rights after riding your purpose built dually through Namibia doesn’t it?

Emilio is not alone in riding inappropriate bikes in inappropriate places. Nick Sanders is a good example. He rode an Enfield Bullet 61,200 k’s around the world. No big deal, he jumped on a Yamaha R1 and rode 32,070 k’s in under 32 days. All in all, he has done 7 around the world bike trips (his first RTW trip was by bicycle) ‘Nuffsaid!’. 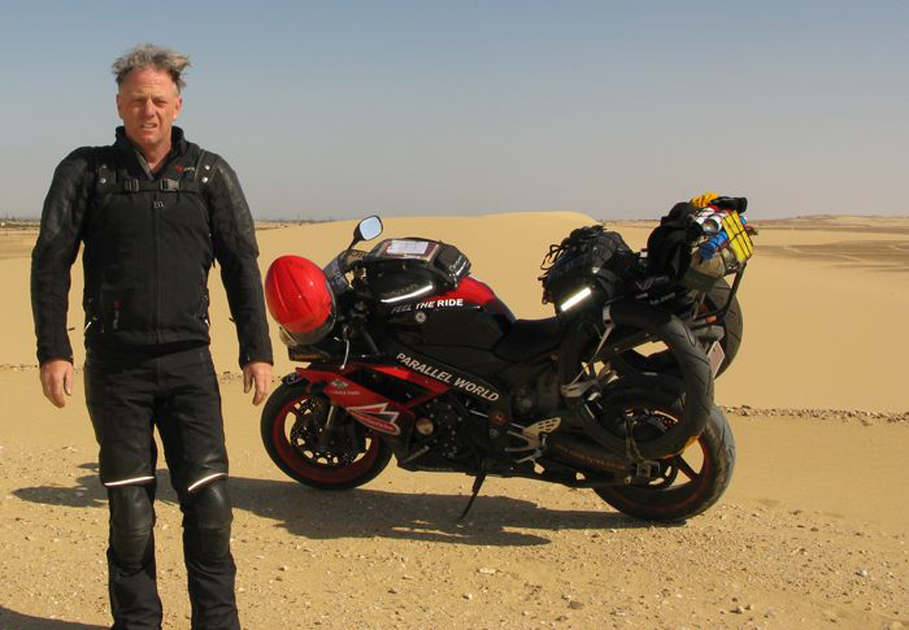 Seems fellows with the surname Sanders have a penchant for this sort of thing. Kevin Sanders holds the world record for a motorcycle circumnavigation. Alaska to Florida, across Canada, the USA, Europe, Turkey, Iran, Dubai, Australia, New Zealand, and back to America. All in 19 days 8 hours and 25 minutes! Holy cow! Sjaak Lucassen also favours sport bikes for world travel. He did RTW trips on a Honda Fireblade and a Yamaha R1. 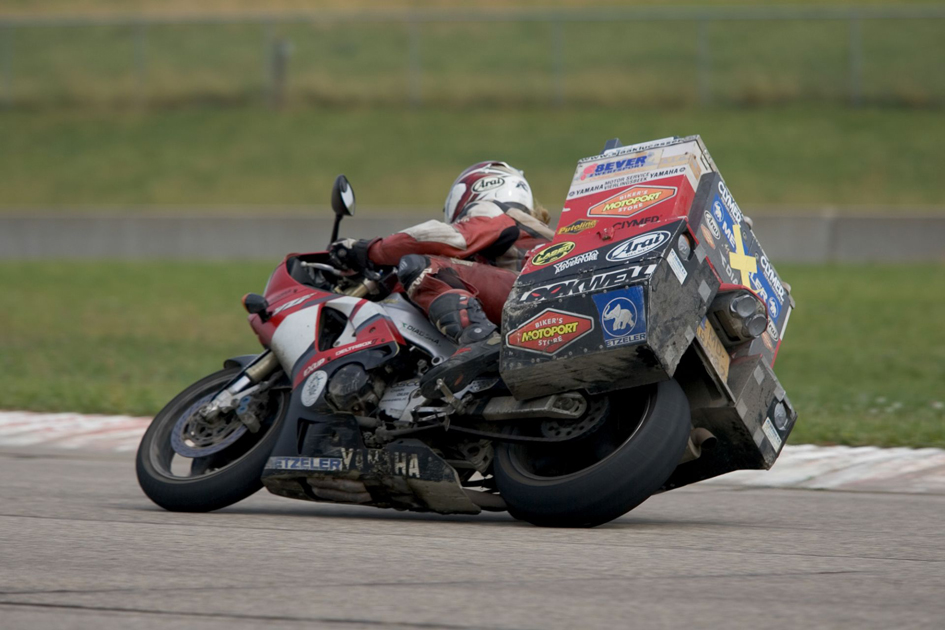 Helgen Pederson put BMW’s venerable GS on the map by travelling across 77 countries over a ten-year period, doing about 400,000 k’s on his R80GS. John Gerber travelled 32,000 k’s on his Vespa Rally 180. Zoltan Zulkowsky and Gyula Bartha covered 170,000 k’s around the world on their Harley back in the day. The day was 1928 to be precise! 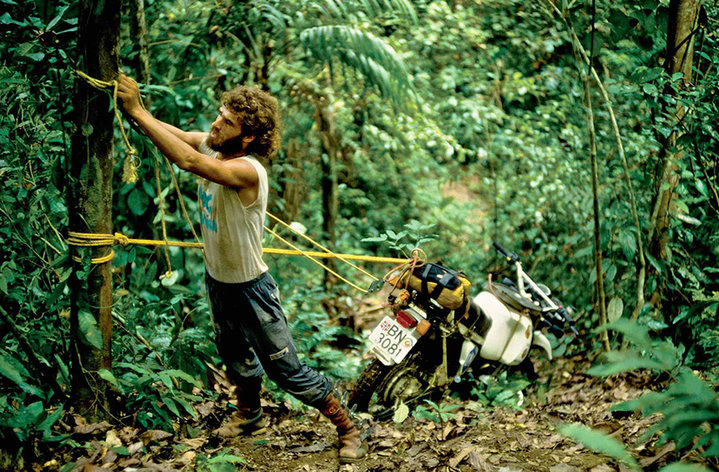 Perhaps the best documented travelogue is that by Ted Simon. Ted, a journalist in London, chose a 500 cc Triumph Twin as his means of adventure travel. When Ted decided to travel the world he felt the obvious mode of transport was a motorcycle, despite, not at that point owning a bike or possessing a bike licence. His book, “Jupiter’s Travels”, is a must read for any aspirant motorcycle traveller. 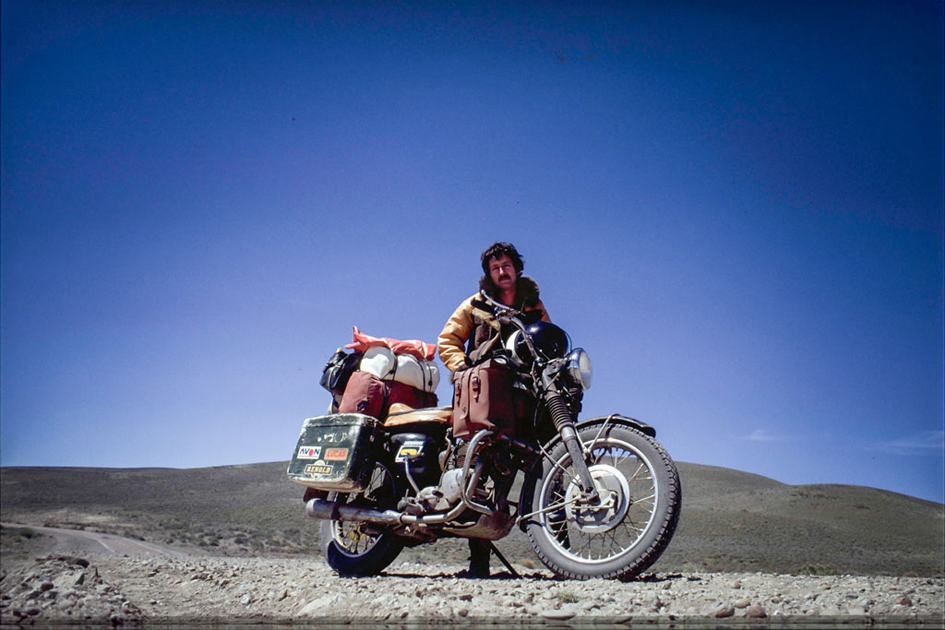 Four years and 126,000 k’s later, Ted completed his journey. His account is not just about the bike, but also richly interwoven with the adventures and fluctuating emotions common to almost all long term travellers. He also factually documented the world as he saw it in 1974. The trip, undertaken at the age of 42 was hard yet exciting. Interestingly Ted undertook another trip at the age of 70, retracing his route from 1974. His views on how the world had changed over the span of 24 years is rather sobering to say the least. It certainly makes “Dreaming of Jupiter”, his account of his second trip, tantalizing reading.

“What if my bike breaks?” is certainly a thought in the back of every long distance riders mind. Ted’s bike ate its first set of pistons after 7,000 k’s. Emilio Scotto by comparison had his one and only engine overhaul after an incredible 250,000 odd miles, despite putting his Wing through the most unspeakable torment. In Iceland it took him an hour to cover 150 metres. In the Congo he rode through mud holes big enough to swallow a truck, and Asia in monsoon season. It defies belief that a luxury tourer could survive even a tenth of what was thrown at it! It’s an incredible testimony to Honda build quality and reliability! 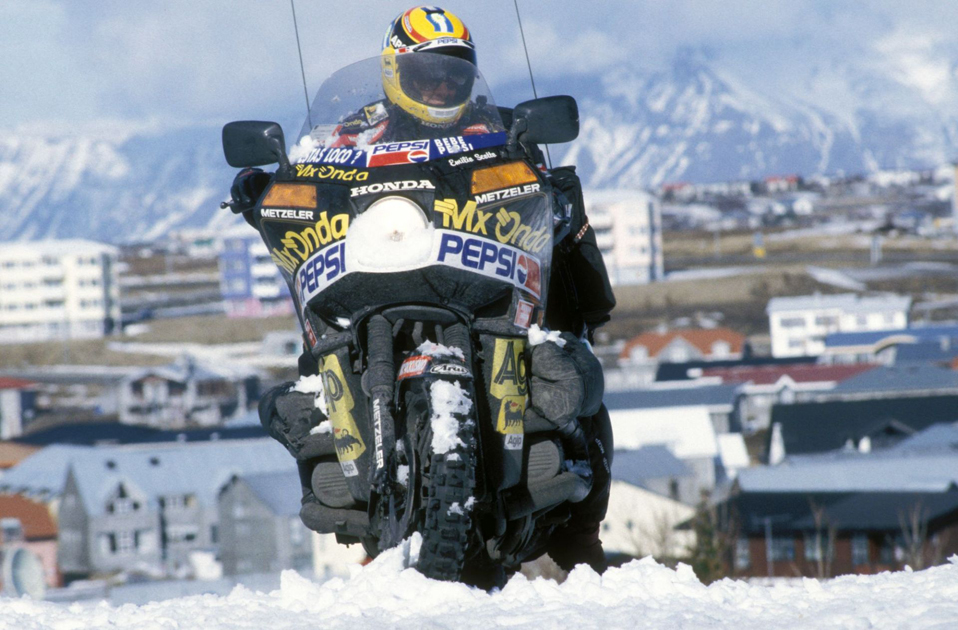 So what do we glean from all of this? Firstly, the incredible resilience of the human spirit. If you believe it you can achieve it! Secondly, motorcycles, no matter what form they take are the true adventurers first choice of transport. The question is not whether your bike is up to it but whether you are up to it?

Perhaps I should end my telling you about another Guinness World Record holder, Dave Barr. Dave was a career soldier. Helicopter gunship gunner for the last two years of the Vietnam War. Joined the Israeli Defence Force and served for two years as a paratrooper. Seems this wasn’t enough adrenalin for this junkie as he then joined the Rhodesian light Infantry to fight communism in another form. At the end of hostilities he moved south and joined the SA Defence Force, where he served in 32 Battalion as gunner on the legendary Col. Jan Breytenbach’s jeep. 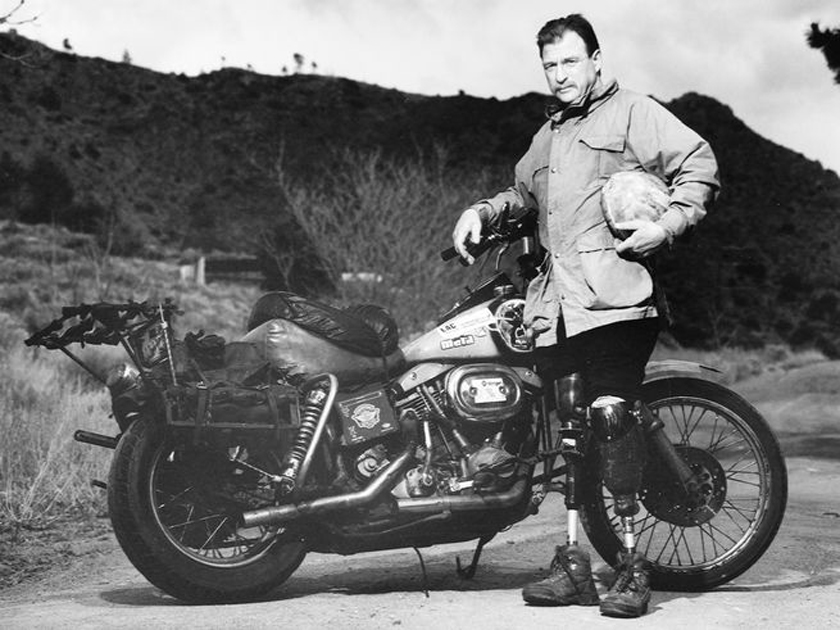 Dave’s military career essentially ended when the vehicle hit a landmine. Pulled from the burning wreckage by Col. Jan, Dave lost both his legs. One just above and the other just below the knee. After a lengthy convalescence Dave returned to the States and, fitted with prosthetic limbs, jumped on his 1972 Harley Wide Glide and rode 133,575 k’s around the world. He was first motorcyclist to traverse Siberia in the winter. In answer as to why in winter, Dave simply says, “Well, frostbite on my feet wasn’t a problem”. He subsequently rode an 883 Sportster to the four compass extremities of Australia for a second Guinness record. 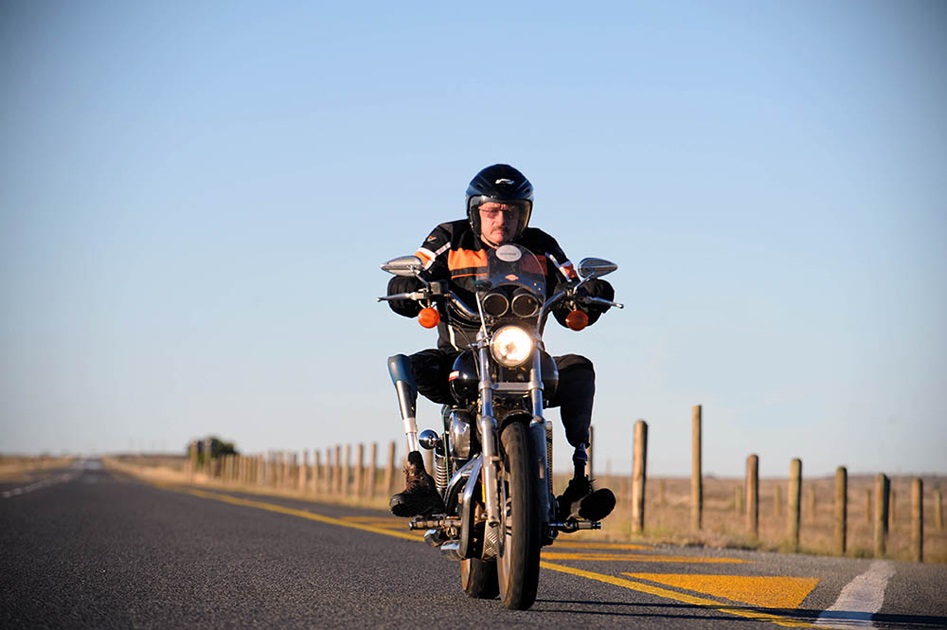 Dave has a deep love for Southern Africa and does annual fund raising rides across S.A. When asked why he does these things he gives a profound answer. He says that when we cash in our chips and God enquires what we did with the incredible gift of life he gave us, we better have some proper answers. Makes one think, doesn’t it?

My name is Dave Cilliers. I consider cars as four wheeled shopping baskets and only worth using as a last resort! For years bikes have been my primary transport. Racing, touring, commuting or just kicking up dust on African tracks, I have owned over 270 motorcycles and ridden millions of kilometres. I am happiest when sharing my passion for motorcycles with like minded people whilst traversing Africa in search of adventure.